A Great Espresso :: The Making Of Perfect Coffee 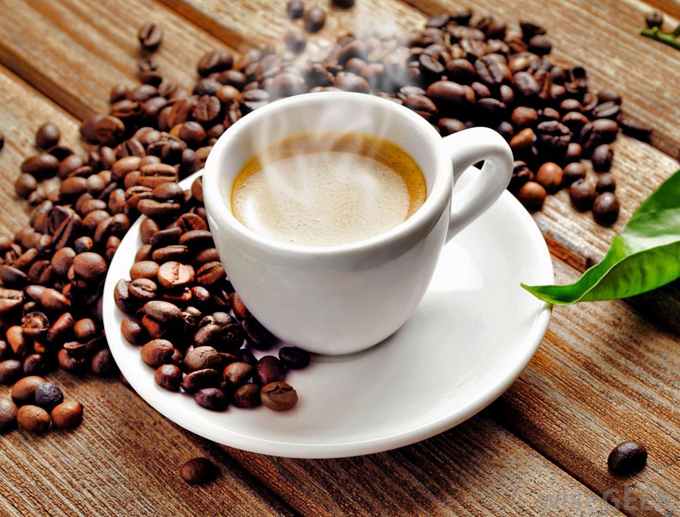 What is it that distinguishes a lovely espresso from a bad expresso?

Is it me or does it anger you when you listen to people asking for an expresso? I'll have expresso & latte, they say with as much ease & confidence as Kath & Kim. The word is espresso! Translated literally it means on the spur of the moment. To me that doesn't say express. When I listen to express I think children & breast milk, trains not coffee.

A true espresso ought to be drunk quickly, yet the speed denotes the decision to drink or order the coffee than the hastiness with which it is prepared.

A true espresso must be consumed immediately, so I guess that is the only bit that has anything to do with expresso.

In Search Of The Ideal Brew

The majority of early coffee-drinkers in Europe mad e the beverage in much the same way as the Turks. Boiling water was poured on to finely ground coffee in the cup, resulting in a thick and potent brew. As coffee-brewing equipment proliferated, however, so did the nuances of national styles. Various individuals, too, had their own somewhat eccentric methods.

Coffee as perfected by the French was generally acknowledged among connoisseurs to be the best. Cast-iron coffee roasters and wooden coffee grinders were de rigueur in every household. Instead of boiling the beverage for hours, the French generally favored the infusion method at first, before moving on to the drip-filter coffee pot and, later, the more sophisticated percolator.

Napoleon Bonaparte had his own way of brewing the perfect cup, and favored the use of cold water. A connoisseur at the time wrote: "Put about two ounces of ground coffee for each person into a Percolator Coffee-pot, pressing down with a ramrod, withdraw this and put on the tin covering for spreading the water over the coffee. Pour on the coffee clear cold water, and when a sufficient quantity has filtered through, plunge the jug containing the liquor into boiling water just before taking it to the table."

Some of the 19th-century coffee houses served specialities such as mazagran, an Algerian- . . S style coffee extract diluted with cold water a n d served in a special stemmed glass.

The practice of spiking coffee with alcohol also developed. William Ukers describes a unique iced coffee served in Normandy: "The man...takes half a cup of coffee, and fills the cup with Calvados, sweetened with sugar, and drinks it with seeming relish. Ice cold coffee will almost sizzle when Calvados is poured into it. It tastes like a corkscrew, and one drink has the same effect as a crack on the head with a hammer".

Austrian coffee-drinkers favored the French-style drip method or a pumping percolator device called the Vienna coffee machine. They were among the first to serve coffee with a cloud-like topping of whipped cream.

On entering an Austrian coffee house, it was an absurd request to simply ask for a coffee. As George Mikes points out, there was a rich choice to be had: "strong, weak, short, long, large, medium , small, in a glass, copper pot, light brown, with milk , whipped cream, espresso...Turkish gold, nut gold, nut brown, Kapuziner (dark) or Franciscans (lighter), with rum , whisky, with egg".

Northern Europe and Scandinavia shared the Austrian weakness for cream, though the Danes preferred their coffee black. The Dutch were particularly civilized in their manner of serving - good quality coffee was served in a pot on a tray accompanied by a pitcher of cream, a glass of water and a tiny plate with three sugar cubes.

In Scandinavia, the more sophisticated European brewing methods and manner of serving did not catch on. Coffee was generally boiled or stewed in a kettle and then brought to the table in a pot, or even poured straight from the kettle. The Finns were reputed to use fish skins to settle coffee grounds and clarify the brew.

British coffee in the 19th century was not always universally recommended. Despairing of procuring a good cup of coffee in Britain, one former planter concluded: "coffee is spoiled in the burning, and sufficient care is not taken in preparing it for the table".

He goes on to deplore the "antediluvian method" of frying coffee beans with butter, declaring: "In private families, where this beverage is taken once a day, a coffee-roaster must be provided...Those who have not the facilities for roasting the berries themselves, should employ one or other of the leading coffee-roasters...who may be safely entrusted with the...berry".

Slow and steady Dr William Gregory of Aberdeen, Scotland, swore by lengthy cold water percolation requiring a laboratory-like arrangement of glass cylinders, funnels and bottles. The process took three or four days which, as he himself acknowledged, was a little tedious, stating: "it is necessary, as soon as the first portion is exhausted, to see a second in operation. In this way a supply is always to hand".

American eccentricities The Americans were particularly esoteric in their coffee-brewing habits. Boiling was the preferred technique, for ten minutes or even up to several hours. Some early recipes advised adding the white, yolk and even the crushed shell of an egg to provide richness of color when milk was added. If fresh eggs were in short supply, an uncooked square of codfish skin was sometimes recommended. These curious techniques were reputedly popular with many American coffee lovers as late as 1880.

Elements of a lovely espresso

An espresso is a small, concentrated coffee beverage, consisting of 7 grams of coffee for a single, 14 for a double espresso, served in a demitasse cup. The actual meaning of the word is a small cup of coffee, or the cup in which it is served so, next time you are asked to prepare an espresso make sure you have a miniature coffee cup on hand beside your coffee machine. The size of the cup is a true reflection of the quality of the espresso.

The Crema Says It All!

What is crema, you ask under your breath, not desirous to sound ignorant. Yes, it is French for cream, yet is has nothing to do with cream, or milk. It does denote the presence of foam however. In case you do spot foam on your espresso, it means you are halfway there... it means you have probably had lovely control over other significant variables needed to produce a lovely espresso, & indeed your cup might be known as well-pulled!

Crema is in actual fact an element of the espresso beverage, not an additional part. A lovely espresso shouldn't be all or even mostly crema, nor ought to it have less than 1/10th crema. Crema sits unashamedly on the top of the beverage, giving it an pretty look & a splash of caramel colour .It is also what causes the famous mouthfeel (body) & after-taste. It acts as a cap, retaining the aroma & flavor of the espresso beverage. Technically speaking, crema signifies the small gas bubbles suspended in a liquid, oily film, between the water molecules. The crema effect ought to last two minutes before the suspended water molecules deplete, the gas is released & the coffee-brown liquid underneath is revealed.

The must-haves of a nice espresso

Historically in the past, espresso is prepared by a master coffee maker, or barista. Nowadays, American coffee houses are well equipped with their own baristas, and our coffee machines and coffee drinks are among some of the best in the world.

A trained barista is usually concerned with things when preparing an espresso worth speaking about:

A Final Word From The Judges

To summarize, a good espresso is judged on the following points: