History Of Coffee : : Origins Of Coffee 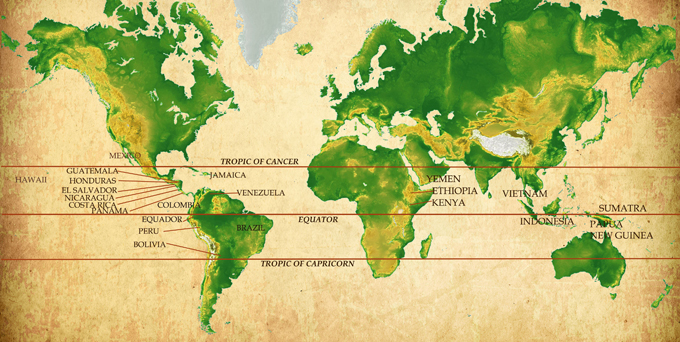 The history of coffee goes at least as far back as the thirteenth century. The Kefficho People(The people who life in Keffa region ) who were the first to discover and recognize the energizing effect of the coffee bean plant. The story of Kaldi, the 9th-century Ethiopian goatherd who discovered coffee, did not appear in writing until 1671 AD and is probably apocryphal. From Ethiopia, coffee was said to have spread to Egypt and Yemen. The earliest credible evidence of either coffee drinking or knowledge of the coffee tree appears in the middle of the fifteenth century, in the Sufi monasteries of Yemen. By the 16th century, it had reached the rest of the Middle East, Persia, Turkey, and northern Africa. Coffee then spread to Italy, and to the rest of Europe, to Indonesia, and to the Americas.

The word "coffee" entered English in 1598 via Dutch koffie, borrowed from Turkish kahve, in turn borrowed from Arabic qahwa, a truncation of qahhwat al-bun 'wine of the bean'. A possible origin of the name is the Kingdom of Kaffa in Ethiopia, where the coffee plant originated; its name there is bunn or bunna.

There are several legendary accounts of the origin of the drink itself. One account involves the Yemenite Sufi mystic Ghothul Akbar Nooruddin Abu al-Hasan al-Shadhili. When traveling in Ethiopia, the legend goes, he observed birds of unusual vitality, and, upon trying the berries that the birds had been eating, experienced the same vitality.

Other accounts attribute the discovery of coffee to Sheik Abou'l Hasan Schadheli's disciple, Omar. According to the ancient chronicle (preserved in the Abd-Al-Kadir manuscript), Omar, who was known for his ability to cure the sick through prayer, was once exiled from Mocha to a desert cave near Ousab. Starving, Omar chewed berries from nearby shrubery, but found them to be bitter. He tried roasting the beans to improve the flavor, but they became hard. He then tried boiling them to soften the bean, which resulted in a fragrant brown liquid. Upon drinking the liquid Omar was revitalized and sustained for days. As stories of this "miracle drug" reached Mocha, Omar was asked to return and was made a saint.

Another story involves a goat-herd, Kaldi, who, noticing the energizing effects when his flock nibbled on the bright red berries of a certain bush, chewed on the fruit himself. His exhilaration prompted him to bring the berries to a Muslim holy man in a nearby monastery. But the holy man disapproved of their use and threw them into the fire, from which an enticing aroma billowed and the holy men came. The roasted beans were quickly raked from the embers, ground up, and dissolved in hot water, yielding the world's first cup of coffee.

The Ethiopian ancestors of today's Oromo tribe, were the first to have recognized the energizing effect of the native coffee plant. Studies of genetic diversity have been performed on Coffea arabica varieties, found to be of low diversity but which retained some residual heterozygosity from ancestral materials, and closely related diploid species Coffea canephora and C. liberica; however, no direct evidence has ever been found indicating where in Africa coffee grew or who among the natives might have used it as a stimulant, or known about it there earlier than the seventeenth century.

Coffee Drinking in the United States

The habits of coffee drinkers in America developed quite differently from those in Europe and Britain, and the tastes and coffee drinking establishments often differed. For Americans traveling abroad in the late 19th and early 20th centuries, European coffee simply did riot measure up to their home-brewed coffee.

In A Tramp Abroad, Mark Twain declares: "You can get what the European hotel keeper thinks is coffee, hut it resembles the real thing as hypocrisy resembles holiness. It is a feeble, characterless, uninspiring sort of stuff, and almost as undrinkable as if it had been made in an American hotel". Conversely, Europeans traveling in America bemoaned the lack of congenial coffee houses in which to while away the hours.

By the early 20th century, coffee imports to the United States had tripled, and annual consumption was up to 11 pounds per head. Consumption peaked after World War II in 1946 at 20 pounds a head.

The 1920s saw a number of coffee houses established in New York's Greenwich Village, the artists' traditional quarter. They became known as "Java spots" and were popular with American writers, film-makers, singers and actors, and with the many new emigrant writers and artists.

During the 1960s these coffee houses had become popular with the young. The legendary musician Bob Dylan is said to have arrived from the West at the Cafe Wha in Greenwich Village, and asked the manager if re could sing a few songs.

Though the majority of Americans do their coffee-drinking at home, the 90s saw the rise in popularity of outlets such as Starbucks, selling speciality coffees. These include gourmet or single-estate coffees as well as various kinds of cappuccino, espressos and flavored coffees. As in the United Kingdom, there is also an increasing number of cybercafes and ) drive-throughs, as well as coffee shops in upmarket fast-food outlets, convenience stores and bookshops.