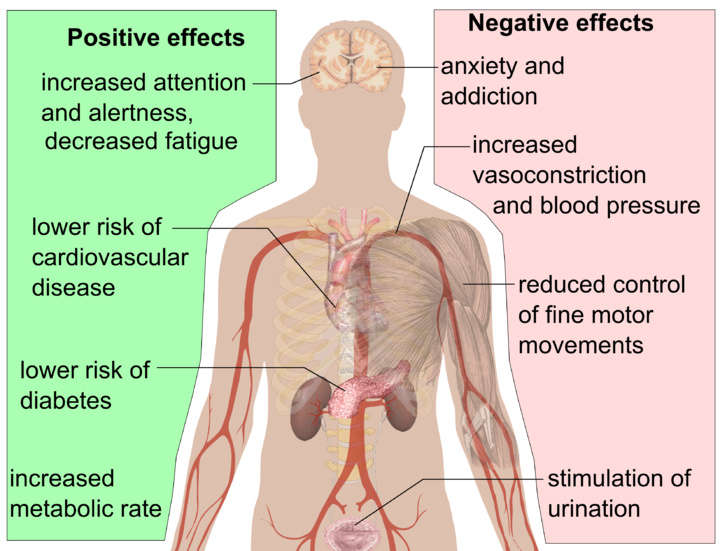 The health effects of coffee have been studied to determine how coffee drinking affects humans. Coffee contains several compounds which are known to affect human body chemistry. The coffee bean itself contains chemicals which are mild psychotropics for humans as a defense mechanism of the Coffeacute plant. These chemicals are toxic in large doses, or even in their normal amount when consumed by many creatures which may otherwise have threatened the beans in the wild. Coffee contains caffeine, which acts as a stimulant.

Recent research has uncovered additional stimulating effects of coffee which are not related to its caffeine content. Coffee contains a currently unknown chemical agent which stimulates the production of cortisone and adrenaline, two stimulating hormones.

For occasions when one wants to enjoy the flavor of coffee with almost no stimulation, decaffeinated coffee (also called decaf) is available. This is coffee from which most of the caffeine has been removed, by the Swiss water process (which involves the soaking of raw beans to remove the caffeine) or the use of a chemical solvent such as trichloroethylene ("tri"), or the more popular methylene chloride, in a similar process. Another solvent used is ethyl acetate; the resultant decaffeinated coffee is marketed as "natural decaf" because ethyl acetate is naturally present in fruit. Extraction with supercritical carbon dioxide has also been employed.

Decaffeinated coffee usually loses some flavor compared to normal coffee. There are also coffee alternatives that resemble coffee in taste but contain no caffeine (see below). These are available both in ground form for brewing and in instant form.

Drinking caffeinated coffee has been correlated with a lower incidence of gallstones and gallbladder disease in both men and women in two studies performed by the Harvard School of Public Health. A lessened risk was not seen in those who drank decaffeinated coffee. A recent study showed that roast coffee protected primary neuronal cells against hydrogen peroxide-induced cell death.

Many people drink coffee for its ability to increase short term recall.

Likewise, in tests of simple reaction time, choice reaction time, incidental verbal memory, and visuospatial reasoning, participants who regularly drank coffee were found to perform better on all tests, with a positive relationship between test scores and the amount of coffee regularly drunk. Elderly participants were found to have the largest effect associated with regular coffee drinking. Another study found that women over the age of 80 performed significantly better on cognitive tests if they had regularly drunk coffee over their lifetimes.

Coffee contains caffeine, which increases the effectiveness of pain killers, especially migraine and headache medications. For this reason, many over-the-counter headache drugs include caffeine in their formula.

Coffee intake may reduce one's risk of diabetes mellitus type 2 by up to half. While this was originally noticed in patients who consumed high amounts (7 cups a day), the relationship was later shown to be linear.

Coffee can also reduce the incidence of cirrhosis of the liver and has been linked to a reduced risk of hepatocellular carcinoma, a primary liver cancer that usually arises in patients with preexisting cirrhosis. The exact mechanism and the amount of coffee needed to achieve a beneficial effect have long been unclear. The cytokine transforming growth factor (TGF) beta has long been recognized for promoting fibrosis ability acting through the Smad family of transcription factors. In an interesting report recently published in the Journal of Hepatology, Gressner and colleagues provide the first mechanistic context for the epidemiological studies on coffee drinkers by showing that caffeine may have potent anti-fibrotic capabilities through its ability to antagonize the Smad pathway.

Coffee consumption is also correlated to a reduced risk of oral, esophageal, and pharyngeal cancer. In ovarian cancer, no benefit was found. In the Nurses' Health Study, a modest reduction in breast cancer was observed in postmenopausal women only, which was not confirmed in decaffeinated coffee. According to one study, coffee protects the liver from cancer. Another preliminary study found a correlation between coffee consumption and a lower risk of aggressive prostate cancer.

Coffee moderately reduces the incidence of dying from cardiovascular disease, according to a large prospective cohort study published in 2008. A 2009 prospective study in Japan following nearly 77,000 individuals aged 40 to 79 found that coffee consumption, along with caffeine intake, was associated with a reduced risk of dying from cardiovascular disease.

Coffee is also a powerful stimulant for peristalsis and is sometimes considered to prevent constipation. However, coffee can also cause excessively loose bowel movements. The stimulative effect of coffee consumption on the colon is found in both caffeinated and decaffeinated coffee.

Practitioners in alternative medicine often recommend coffee enemas for "cleansing of the colon" due to its stimulus of peristalsis, although medicine has not proven any benefits of the practice.

Contrary to popular belief, caffeine does not act as a diuretic when consumed in moderation, and does not lead to dehydration or to a water-electrolyte imbalance; current evidence suggests that caffeinated beverages contribute to the body's daily fluid requirements no differently from pure water.

Coffee contains the anticancer compound methylpyridinium. This compound is not present in significant amounts in other foods. Methylpyridinium is not present in raw coffee beans but is formed during the roasting process from trigonelline, which is common in raw coffee beans. It is present in both caffeinated and decaffeinated coffee, and even in instant coffee. Research funded by Kraft shows that roast coffee contains more lipophilic antioxidants and chlorogenic acid lactones and is more protective against hydrogen peroxide-induced cell death in primary neuronal cells than green coffee. The espresso method of extraction yields higher antioxidant activity than other brewing methods.

The tannins in coffee may reduce the cariogenic potential of foods. In vitro experiments have shown that these polyphenolic compounds may interfere with glucosyltransferase activity of mutans streptococci, which may reduce plaque formation.

Coffee as a Stimulant 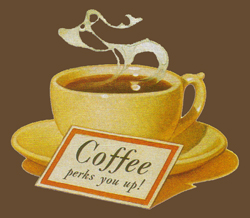 Above : The stimulating and invigorating properties of coffee are shown in a positive light in this advertisement from the Pan-American coffee bureau in the 1950s.

Certain after-effects of caffeine did not go unnoticed. One respected medical man wrote - "When I awake I have the intelligence and activity of an oyster.

Immediately after our coffee, the stores of memory leap, so to speak, to our tongues; and talkativeness, haste, and the letting slip something we should not have mentioned, are often the consequence. Moderation and prudence are wholly wanting".

More positively, a Dr Thornton asserted: "A cup of Coffee strengthens and exhilarates our menial and bodily faculties; and nothing can be more refreshing either to the studious or the laborious".

Other eminent writers also wrote appreciatively of coffee's power to stimulate creativity. Balzac, Zola, Baudelaire, Victor Hugo, Moliere and Voltaire were among its most ardent imbibers. Both Voltaire and Moliere are quoted as replying to the remark that coffee was a slow poison: "I have drunk it upwards of fifty years, and unless it were very slow indeed, I would certainly have been dead long ago".

The effects of over-indulgence gave rise to considerable medical comment.

Hahnemann refers to the "coffee disease" which results in "an unpleasant feeling of existence, a lower degree of vitality, a kind of paralysis". Other negative effects were reputedly melancholia, piles, headaches and a reduced libido.

There was concern, too, about the harmful effect coffee might have on children and nursing mothers. It was thought to be a major cause of tooth decay and rickets in children, and "a rattling of the breast" in nursing mothers.

Among coffee's opponents was Sinibaldi, an eminent Italian medical writer. He stated: "The commerce which we have opened with Asia and the new world, in addition to the smallpox and other diseases, has brought a new drink, which has contributed most shockingly to the destruction of our constitutions...it produces debility, alters gastric juice, disorders digestion, and often produces convulsions, palsy of the limbs and vertigo."

The medical debate was to continue tor many years, as doctors, pursuing new avenues of insight, argued the pros and cons of coffee, claiming it to be alternatively therapeutic and detrimental to the body and mind. This debate still continues today.

Coffee and healthy skin As a country whore green tea has been the national beverage for nearly 1,000 years, Japan was understandably slow to take up coffee drinking. It was not introduced until the 19th century and even today is still a relatively undeveloped market.

Apart from drinking coffee, however, Japan is home to the slightly unusual practice of lying in the roasted coffee beans. It is thought that the coffee contains elements beneficial to healthy skin.